Team Mikayla has been awarded The Queen’s Award for Voluntary Service – the “MBE for Volunteer Groups” - the highest award for the voluntary sector in the UK. 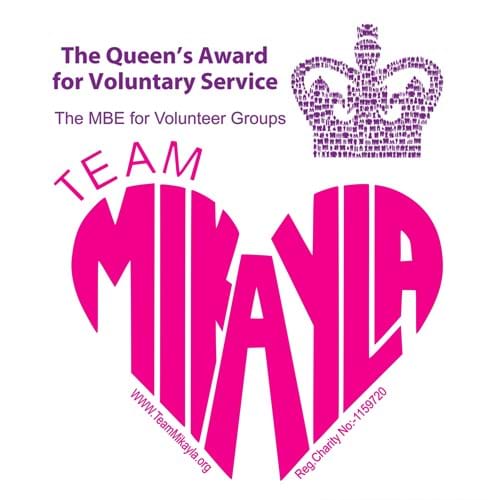 Inspired by 14-yr-old Mikayla Beames, of Childrey, near Wantage, Team Mikayla has granted over 150 wishes to children fighting cancer and receiving treatment at either the John Radcliffe Hospital, Oxford or the Leicester Royal Infirmary.  In the seven years since its inception, the Charity has steadily increased its number of beneficiaries whilst also gifting Christmas presents and Easter eggs to the In-Patients, and general gifts for the Wards such as tablet devices and games consoles.

“Over the past three and a half years we have held various charity fund raising events at our Burton Latimer headquarters that have raised over £4,000. The next big challenge will be the Inca Trail walk in 2023, which we will be making a lot of noise about. Without the willingness and passion of volunteers to keep fundraising and building awareness, the great work Team Mikayla do wouldn’t be possible.”

Keen cyclists, the pair also took part in the annual Ride London event, as well as helping with media duties when called upon.

“No one wishes to hear the news that their child or others have cancer. That’s why it is so important that we continue to support and share stories of Team Mikayla, to ensure children and families are supported in the fight against this disease, said Ben Green, Marketing Director at Alumasc WMS.

“I, like Wayne, am ecstatic that the charity has received this recognition and can’t wait to get the bike back out to raise even more money for a very worthwhile cause.”

A cancer fighter herself for the past ten years, Mikayla knows all-too-well the pain and distress of frequent hospital visits and treatments, so to have the hard work and commitment of the Charity honoured by Her Majesty has raised a very big smile indeed.  Perhaps befitting of the Charity’s character, Mikayla said: “Being recognised by The Queen, for all the effort the Trustees have put in since 2014, is just incredible!  We are very fortunate to have amazing supporters and donors which has allowed us to achieve our aims; this award is just as much theirs.”

Mikayla and her twelve Trustees will receive the award crystal and certificate from Tim Stevenson OBE, Her Majesty’s Lord-Lieutenant of Oxfordshire later this summer, whilst two Trustees will attend a garden party at Buckingham Palace in May 2022 (depending on restrictions at the time), along with other recipients of this year’s Award.